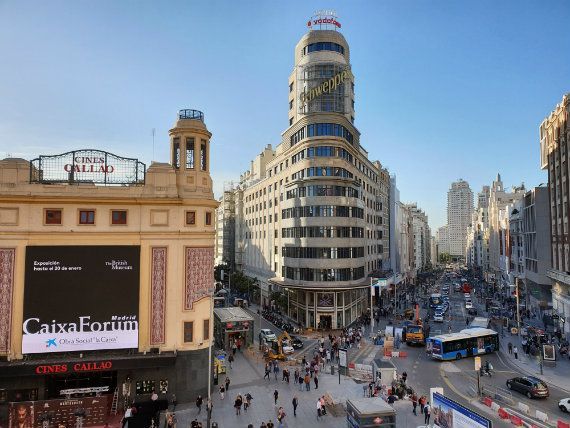 Contenidos ocultar
1 6 jewels of the architecture of Madrid that you must visit in your next trip to Madrid
1.1 #1 Torres Blancas
1.2 #2 Caixa Forúm
1.3 #3 Institute of Cultural Heritage of Spain
1.4 #4 Palacio de Longoria
1.5 #5 Horse Racecourse of La Zarzuela
1.6 #6 Casa Vallet de Goitysolo
1.7 The jewels of Madrid architecture revealed: Open House Festival

In Madrid, the 20th century has been one of the most prolific regarding architecture. Throughout the past century the city witnessed the birth of dozens of what are now considered true jewels of Madrid’s architecture.

In this article, we gather some of the most unique architectural treasures of the 20th century. You can enjoy many of them not only from the outside, but also from the inside, thanks to the guided tours that take place during the Open House festival. Would you like to discover them?

Pay close attention to these 6 jewels of the architecture of Madrid and do not miss them on your next trip to Madrid.

As an emblem of Madrid’s architecture in its organicist stage, this exceptional building is the result of the work of Navarrese architect Francisco Javier Saénz de Oiza.

It took four years to build this architectural emblem of the Spanish avant-garde in which the surrealist style is combined with neo-expressionism. Torres Blancas has a peculiar structure based on cylinders and is distributed in a total of 23 floors. At present, this building is destined to homes and offices.

The visitor is left speechless in the presence of this impressive architectural work by the Swiss artists Jacques Herzog and Pierre de Meuron which, since 2008, has been the headquarters of Madrid’s Caixa Forúm.

The building is located at the epicenter of Madrid’s art: Paseo del Prado. Next to it, the Prado, Thyssen-Bornemisza and Reina Sofía art galleries. Its unique vertical garden, along with its polygonal spiral staircase, are two of its best attractions.

#3 Institute of Cultural Heritage of Spain

Considered a Property of Cultural Interest since 2001, the headquarters of the Institute of Cultural Heritage, located at Coidad Universitaria, is the summit of contemporary architectural expertise. The circular building, which culminates on its iconic crown of thorns, is the work of one of the great architects of Madrid: Fernando de Higueras.

On this occasion we moved to the Palace of Longoria, current headquarters of the General Society of Authors and Publishers. This building, another of the jewels of Madrid’s architecture, is a true reflection of Spanish modernist trends.

José Grases Riera was commissioned to design this work that was born on the edge of the new century, between 1902 and 1904. Its beautiful domed stained glass window and the circular staircase are some of its most noteworthy elements.

Halfway between show and functionality is the Horse Racecourse of La Zarzuela, designed by architects Carlos Arniches and Martín Domínguez, together with engineer Eduardo Torroja. Some experts have designated it as the last great masterpiece of architecture bequeathed by the Republic (1931-1939).

Since 2009, it holds the BIC title. Three years after its Restoration and Renovation Project, it won the first prize awarded by Madrid’s Professional Association of Architects . Nowadays, the site hosts many races throughout the year. If you are a fan of horse racing, do not miss their guided tour.

We do not want to close this little list without paying tribute to one of those jewels of Madrid’s architecture that are unfortunately agonizing. The Vallet de Goitysolo House of 1958 is one of the three works made in Madrid by José María Coderch, considered one of the forerunners of modernity in Spain and a referential architect of the second half of the past century.

This unique building, which does not have the protection of Heritage, is at risk of collapse. Fortunately, it is still possible to admire it today.

If you are a lover of architecture you cannot miss the Open House Festival organized by the Culture Care Foundation in Madrid. The festival is celebrated once a year concurring with the Madrid Architecture Week after the Architects’ College of the city (COAM) agreed to cooperate with the event back in 2016.

Over the whole weekend, dozens of buildings that are representative of Madrid’s architecture open their doors for all those visitors who wish to approach. Guided visits are totally free and cover buildings of all times and architectural styles.

At the same time contests, workshops, exhibitions and conferences take place, in which not only famous architects of Madrid are present, but also experts in other fields of knowledge like art, philosophy or anthropology.

As you may see, Madrid is a unique city riddled with treasures. We recommend you to discover it and to stay in our boutique hotel: Vitium Urban Suites tu hostal Boutique en Gran vía