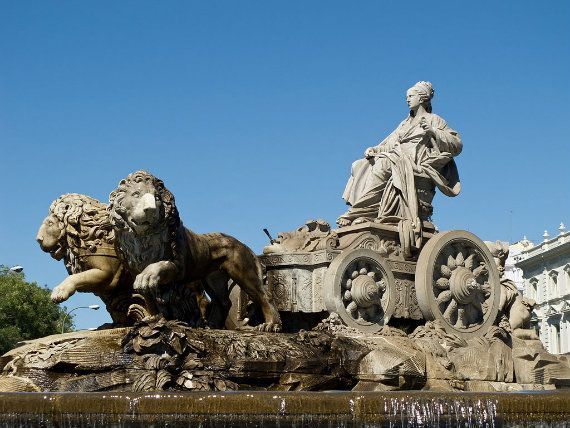 The sources of Madrid are symbols of prestige and magestuosity among the people of Madrid. They usually celebrate important events, like sports celebrations. Do you already know which are the emblematic fountains of Madrid?

Today we will see some examples of the iconic fountains of the city, well recognized by foreigners, as well as tourists who visit us. Do you sign up for our visit?

What are the emblematic fountains of Madrid?

In the center of the fountain is the goddess Cibeles accompanied by a car carried by two lions. This fountain was installed in the city in the year 1782.

First, it was built on a corner of Cibeles square. But, later, it was moved to the downtown area of Madrid, right where it can currently be seen.

In Cibeles source is where the victories and titles of Real Madrid are celebrated, such as the recent Champions League, when they managed to defeat Liverpool in Cardiff.

Located in the Cánovas del Castillo square, in this fountain appears the god Neptune with two horses and a car. Also, a snake appears that is wrapped around the chest of the figure and we must not forget the presence of the famous trident.

The monument dates back to 1786. When Atlético of Madrid has won some important title, such as the recent European Supercup, it is celebrated in this fountain.

#3. Fountain of the Fallen Angel

Inaugurated in 1885, it can be seen in the famous Retiro Park. Many people consider it the source of bad luck because it evokes the devil, although in other cities such as Turin, this type of symbols also appear on some monuments.

The source is 666 meters above sea level. Chance…?

This fountain dates back to 1803. In it, the four seasons of the year are represented, next to the figure of Apollo.
The Paseo del Prado benefits from the presence of this monument because thanks to it the neoclassicist style is accentuated, completely forgotten today.

In Madrid there are two sources with this name, but the only difference is that one is considered original, the one that is located in the Retiro park and, the other, the exact copy is near the Atocha Station.

The original monument was sculpted in 1782. However, the exact copy dates from the 20th century, specifically in the 80s.

This marble fountain stands out for its beauty. It is located in the Royal Palace. The figures that appear are nymphs, children and newts, a very attractive combination for tourists.

It is a monument built in memory of the prestigious author of Don Quixote de la Mancha. It is located is in the Spain Square, surrounded by large skyscrapers.

It is a must see, because it represents the essence of Spanish literature, reflecting in it two important figures such as Don Quixote and Sancho Panza. The fountain of the Monument to Miguel de Cervantes is, therefore, and together with «Barrio de las Letras», one of the icons that reveal the importance of Spanish writers and their connection to the city of Madrid.

In the sculpture also appears a ball of the world, which means the spread of the Castilian language for the rest of the globe.

These are the emblematic fountains of Madrid. If you are looking for information about monuments and historical buildings of the capital to introduce them in your tourist route, in our blog you can find other places of interest.

And if you need accommodation during your stay in Madrid, our exclusive boutique hotel in the middle of Gran Vía is the perfect place for your cultural tourism route. What are you waiting for? Make your reservation!