Plaza España, one of the biggest squares in all of Madrid 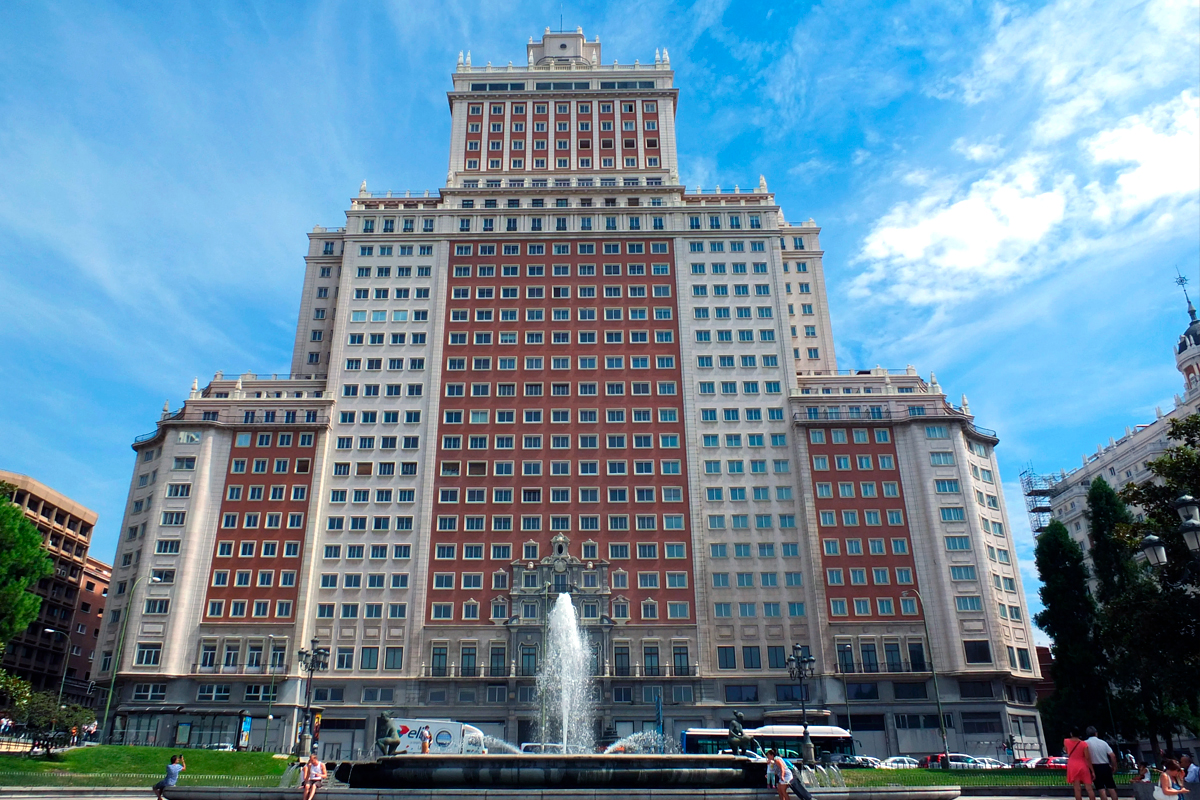 Contenidos ocultar
1 The new Plaza Spain
2 What to see around Plaza España?
3 How to arrive from Vitium Urban Suites?

The Plaza de España in Madrid can be found on the old grounds that were occupied by the Cuartel de San Gil, which was demolished in 1910.

With some 70,000 square meters, which make this square one of the biggest in Spain, it is a central and magnificent place, ideal for taking some good photos, but also for relaxing while watching the incessant movement of the city.

The end of Calle Gran Vía, where our Vitium Urban Suites are located  the Parque del Oeste, Jardines de Sabatini and the beginning of Calle Princesa converge in this square, that makes Plaza España so crowded.

The works of the renovated Plaza España began in 2019 and were completed in November 2021. The new design linked the Plaza de España with the green areas of the Plaza de Oriente, the Sabatini gardens, the Campo del Moro, the Temple of Debod , Madrid Río and Casa de Campo.

Here the protagonist is undoubtedly the pedestrian, who has at his disposal a large central square where the Cervantes Monument is located. Car traffic has been suppressed, which has made the square one of the ideal points to start a walk that you will not forget and that will take you through a large part of the tourist attractions of the capital.

In addition to being able to walk, you can also try it by bike, since the new square has two large bike lanes, the north-south axis that joins Bailén and Ferraz streets, and the east-west axis, which connects the Cuesta de San Vicente with the Gran Vía, and a third that passes between Princesa and Ferraz.

What to see around Plaza España?

La Torre de Madrid, which was built between 1954 and 1957, the tower has a height of 142m and visible from many places on the outskirts of the city, which made it the tallest building in Madrid at the time. The Madrid Tower in Plaza de España was for some years the tallest concrete building in the world.

The Spain Building, with a peculiar stepped front of reddish bricks, the Spain Building has been presiding over the Plaza de España since 1953. Throughout its history it has housed apartments and luxury homes, as well as a shopping centre. In addition, it hides one of the best panoramic bars in Madrid.

Casa Gallardo, located on the corner of Calle Ferraz, Casa Gallardo is a clear example of modernist architecture in the city of Madrid, built between 1909 and 1914. It is a building with a unique beauty that often goes unnoticed.

Monument to Cervantes with Don Quixote and Sancho was inaugurated in 1929, it was made to commemorate the third centenary of the publication of the second part of Don Quixote, the monument crowned by a world globe, used as a metaphor for the internationalization of Cervantes’ work , which is located in the center of the square, represents Cervantes through his two mythical characters, Don Quixote and Sancho Panza. We can also find in the complex the statues of Dulcinea and Aldonza Lorenzo. This is one of the most photographed points in the city of Madrid, with both buildings that we have previously detailed in the overview.

How to arrive from Vitium Urban Suites?

It is very simple, when you leave the building where Vitium Urban Suites is located, you go to your right going down Gran Vía, something like this: 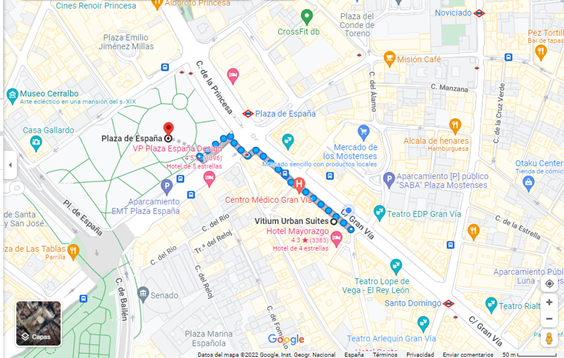 Well now you know how to get to Plaza España in Madrid, now you just need to reserve a room at our Vitium Urban Suites so you can enjoy this wonderful square.