5 curiosities of Plaza Mayor in Madrid 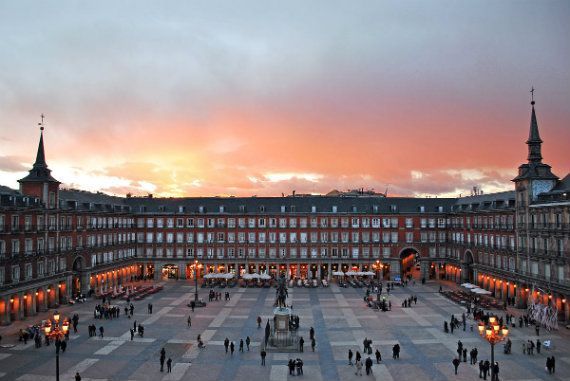 One of the most famous hideouts of the Spanish capital is the Plaza Mayor. Hundreds of tourists pass by it every day eager to know its charms.

The Plaza Mayor in Madrid accumulates over 400 years of history in which it has witnessed from furtive love encounters between King Philip IV and his lover to cruel executions inflicted by the Inquisition. It has also become a scene for bullfighting and has suffered up to 3 fires.

These avatars have served to give character and charisma to this unique square that has become an authentic history museum. We invite you to get to know this fantastic place if you travel to the capital.

To start with, we will now discover 5 curiosities of the Plaza Mayor of Madrid. Let’s start!

5 anecdotes of Madrid’s Plaza Mayor that you should know

The Plaza Mayor in Madrid is a unique place surrounded of life that surprises visitors when they come to know it. These are the 5 most surprising curiosities of Madrid’s Plaza Mayor.

#1 From Lake to a market

In the area where the square is located nowadays there was a lake that was called Laguna de Luján and that dried with the passing of time. At that time (back in the 15th century), this site was located outside the city Walls.

This made it the perfect place for commercial transactions since it wasn´t necessary to cross the wall and pay the resulting tax.

The definitive name of Plaza Mayor is relatively recent. It was at the beginning of Franco’s dictatorship that it was entitled this way (1940), although it is true that this name had already been used to identify the square.

One of the most bitter and cruel passages of this ancient square was its use as a site to celebrate the executions ordered by the Holy Inquisition during the seventeenth, eighteenth and nineteenth centuries.

The public acts in which the condemned had to retract and repent of their sins, known as auto-da-fe, gave way to the murder of the accused.

If this one was «lucky» he would die decapitated and did it looking towards the Bakery House. If fortune was not on their side, they were condemned to garrote vil and for this they were placed in front of the Carnage.

Mathematics are also present in the Plaza Mayor. On the one hand, it has a total of 377 balconies distributed along its four sides, hardly nothing! Among all of them there is one that stands out for its morbid history. We are talking about the balcony of Marizápalos, artistic name for María Inés Calderón or the Calderona.

María Inés was the official lover of monarch Felipe IV. The king asked her to abandon her life in the theater, and in return she asked to be able to witness the shows that took place in the Plaza Mayor from the ladies’ balcony, assigned to the nobility.

Queen Elisabeth of France, the monarch’s wife, felt such annoyance that she ordered her to be expelled from the balcony. Facing this situation, Felipe IV did as he pleased and decided to build the Calderona her own balcony.

114 are the arches that give shape to the lower portals of the square, which is accessed through 10 of them. One of the most famous is the Cuchilleros arch located in the southwest corner. Its architect was Juan de Villanueva and its construction took place after the serious fire of 1790 that reduced the Plaza Mayor to ashes.

Its enormous height, which has earned it the consideration of the first «skyscraper» in Madrid, tries to replace the wide gap between the square and the old San Miguel Cava.

The equestrian statue of Philip III, present in Madrid since 1616, was the focus of controversy for decades because of the bad smell it emitted. He even surrounded the square with vegetation and fountains to try to camouflage it.

The origin of everything was found on April 14, 1931 when Republicans put a firecracker in the horse’s mouth to celebrate the proclamation of the Republic. It was then that hundreds of sparrows were discovered to have found a death trap in the statue. They entered the interior through the mouth of the equestrian statue and, unable to go outside, died. Their decomposed bodies gave off that unpleasant smell.

Tell us! Which of these 5 curiosities of the Plaza Mayor of Madrid has attracted you more attention? Do you already know any of them? We wait for you in the comment area!

Don´t leave without checking our offers of accommodation in the boutique hotel Vitium in Madrid, in the heart of Gran Vía and just 8 minutes walk from the Plaza Mayor.