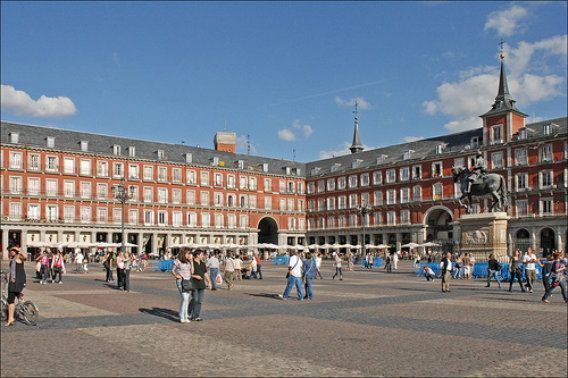 Do you want to go sightseeing in Madrid? Are you in the city and want to take advantage to visit some special corner of the capital? The Plaza Mayor of Madrid is a must if you want to know the most emblematic places of the city.

Madrid has many special places to visit, and the «Plaza Mayor» is one of them. There, a few meters from «Puerta del Sol» and next to «Calle Mayor», you can breathe a very special atmosphere.

The Plaza Mayor of Madrid has four centuries of history in which ones it has witnessed very important moments, as well as all kinds of ordinary scenes of the daily life in Madrid.

Through there, kings or  street performers have walked by. In their porticos sheltered the workshops of the craftsmen and in the market of the town they circulated all type of merchandise.

It was in the Plaza Mayor where San Isidro was beatified, and also where many were executed on the scaffold by the authorities of another time. A space of great contrasts that became one of the most important nucleus of Madrid life since the 16th century.

Last February, Madrid’s «Plaza Mayor» celebrated 400 years of history, an honor celebrated with all kinds of events organized by the city council, which will last for the next two years.

What to see in the «Plaza Mayor» of Madrid

The great architectural value  that the buildings with their arcade square, with its 94 meters wide by 129 long, and the 237 balconies that accumulate its four facades already is quite impressive. But if you want to make the most of your sightseeing visit to the Plaza Mayor in Madrid, there are three elements to look for:

It is also known as the «Escalerilla de Piedra» street, since the square is accessed by descending a stairway that corrects the gap between the southwest corner of the square and the «Cava de San Miguel«.

2. The Statue of Philip III: the impressive equestrian statue of Philip III was a gift from the Duke of Florence, commissioned to John of Bologna and Pietro Tacca in 1616. Although it is the main characteristic of the Plaza Mayor, the monument was at the «Casa de Campo» till the 19th century.

3. The Carlos II’s shield: the House of the Bakery is the most emblematic building of the square. It began to be built in 1590 and was the first of the buildings. The façade, decorated by Carlos Franco, has in the upper central part a shield of Carlos II dating  some date after 1668.

The shield includes the symbol of Granada in the center, the arms of Castile and León, the  Aragon and Sicily, the Austria and the modern Burgundy one, of the Ancient Burgundy and Brabant and the ones of Flanders and the Tyrol.

If you are motivated to visit the Plaza Mayor in Madrid, on Thursdays the city council organizes guided tours as part of the «Madrid for All» program, in which one you can discover all the secrets carefully guarded by this Madrid tourist center.

And if you want to make your visit to the city even more perfect, you can stay at Vitium, our boutique hostel.

An accommodation full of glamour and comfort in a historic building in the heart of «Gran Vía». The icing on the cake on a tourist route through Madrid. We will be waiting for you!