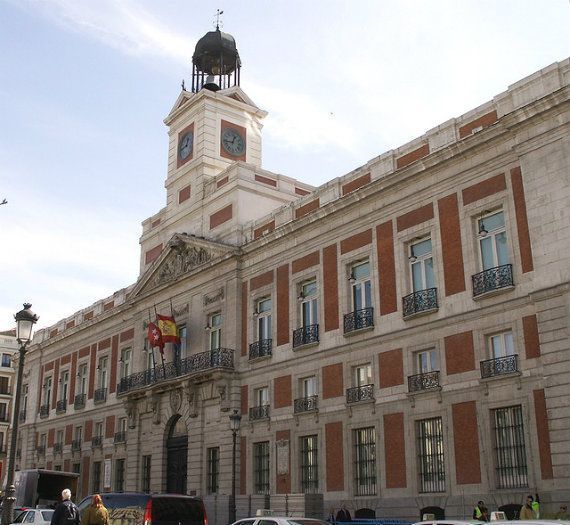 Madrid is a city with an architectural heritage that nothing has to envy to the big European capitals. Do you prepare a tourist visit to Madrid? Here you have a list with the emblematic buildings of Madrid that you should visit.

Historical buildings with functions of administrative officers or of government, headquarters of important economic emporiums, or simply, buildings typical of the life of Madrid. Madrid relies on a great number of emblematic buildings that they help themselves the tourists to soak in the historical and cultural wealth of the city.

Do you want to know the most important buildings of the capital of Spain?

The Most Emblematic Buildings of Madrid

The list of important buildings in Madrid is very long. But in the following list there are some of the most emblematic buildings of the city. Let’s see which are!

A very known not alone building in Madrid, but in the whole Spain. Placed in Puerta del Sol, the Royal House of Post office shelters the clock with which the Persons from Madrid dismiss the year to pace of rings (and also the rest of Spanish thanks to the television), every December 31.

It is a building constructed between 1760 and 1768, of baroque style of stone and brick with elaborated sculptural details, which besides his history and his popularity, he enjoys a great beauty.

Another emblematic building of Madrid that had to lodge Post office and other services as telephony and telegraph is the Palace of Communications (called «Palacio de Cibeles» from 2011), in a wings of Cibeles’s Square. work of the architects Antonio Palacios and Joaquín Otamendi, the last remodeling has been carried out under Francisco Partearroyo’s direction.

It is a question of a gigantic modernist building with influences plateresque and valuable baroque – Salamancan in his white front. In Cibeles Palace, the functionality combines with the aesthetic care of every detail in an architectural set without equally.

Endowed with a great interior court surrounded with doors with access to the services of communications that lodged at the ground floor, he has a great central tower where one finds the tower of telecommunications

Nowadays it is the headquarters of the The Mayor of Madrid, beside sheltering the cultural center CentroCentro, in which exhibitions are realized and which is endowed with an audience for concerts and other acts.

One of the buildings more icónicos of Madrid. The Metropolis Building is located in the number 39 of the Street of Alcala, though many people are in the habit of confusing it with the first building of la Gran Vìa.

His construction goes back 1907, though it will not be inaugurated until January, 1911. The dates coincide with the beginning of the works of construction of the Gran Vìa. The building belongs to Metropolis Insurances from 1972.

The Neorrenacentist building is provided with a circular tower crowned by a dome of slate with inlays in golden bread. It is said that they needed 30.000 sheets of the precious metal to obtain the aspect that shines nowadays.

Under the dome, an impressive sculptural set represents the Commerce, the Agriculture, the Industry and the Mining industry with Mariano Benlliure works between other sculptors of renown.

Originally, the bronce statue of Ganymede was crowning the top of the dome. Now, a Victoria Alada, of Federico Coullaut Valera, occupies his place.

One of the most emblematic buildings of Madrid that you will find in postcards and photographies of the city.

If you have occasion, the Building contemplates Metropolis in the night, under the light of his 205 areas.

The Carrión Building or Capitol Building is one of more famous in Madrid, and is located in the Gran Vía. In his interior it shelters three big rooms with an appraisal of 1.300 persons, who compose the popular Capitol Cinemas.

Constructed in the interval 1931-1933, the Capitol Building is a genuine example of architecture Art Decó. In his construction there joined technologies and materials of construction of forefront in those days, like the first system of refrigeration centralized of Madrid, Vierendeel beam of concrete or textile fireproof materials.

All these advances made him deserving of prizes and distinguished recognitions in the world of the architecture.

The Royal Palace or Oriental Palace scarcely needs presentation. It is a question of the home where traditionally the Spanish Royal Family was residing, since Carlos III was establishing there his habitual residence in 1764.

At present, the royal family resides in the Palace of the Operetta. Nevertheless, his paper still continues being very important, provided that in his interior there are celebrated ceremonies, receipts and all kinds of institutional acts.

The Oriental Palace is raised in the same location in the one that was the Austrian Palace, destroyed in 1734 by a fire. The works of construction of the Royal palace began in 1738.

Besides the historical and architectural incalculable value, the Royal Palace is surrounded by the gardens Sabatini, in the western part, and the Field of the Moor, in the north part, of great beauty. It cannot be absent in your tourist route for Madrid.

Now already you have your small guide with the emblematic buildings of Madrid that the whole world should visit to know more thoroughly the history and the culture of the Capital.

But you can see one more building, and even to lodge at him. And it is that Vitium Urban Suites is located in the Gran Vía 61, in a precious historical building.

If you travel to Madrid, boutique to lodge at our hotel can be different of the attractions of your tourist visit.

More than a hotel, an experience! Visit us.