The Gran Vía:our home in Madrid 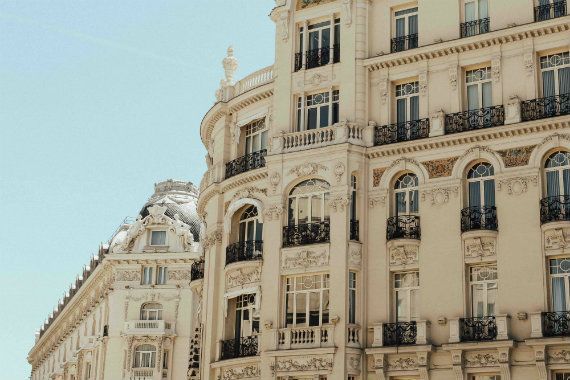 Contenidos ocultar
1 The history of the Gran Vía in less than a minute
2 The «Broadway» from Madrid
2.1 The emblematic buildings, one of the main tourist attractions of Gran Vía
2.2 New Gran Vía, the future is here

It is an authentic icon of Madrid. Much more than one of the main arteries of the City, the Gran Vía is one of the most characteristic avenues of the capital. We propose a trip through its history, its imposing buildings, its classic cinemas and theaters, and the future of Gran Vía. Do you sign up?

The history of the Gran Vía in less than a minute

We have many aspects to highlight from the Gran Vía, and that is why we can´t extend here too much on its history. But surely some of the main nuances of his past will seem most exciting.

Although the planning of the project began in the late nineteenth century, the works of the Gran Vía wouldn´t begin until 1910. The purpose was to open a road that communicated Alcalá street and the current Spain Square (at that time, San Martial Square).

It was necessary to demolish some buildings, but soon it began to flourish, like one of the big European boulevards, an avenue full of shops, department stores and what would be its characteristic cinemas.

To complete this minute of history of the Gran Vía, do not miss this post:

The «Broadway» from Madrid

As we indicated in our brief review of its history, Madrid’s Gran Vía has been internationally known for its cinemas and its theaters.

Among the most known projection rooms is the Capitol Cinemas, in Gran Vía 41; the Cinema Press Palace, on Gran Vía 46; and the Callao Cinema, in the Callao Square, from which it takes its name.

At present, the Gran Vía has been devoted to musicals, which attract spectators from all over the country, in addition to the thousands of tourists who come to see them.

Do you want to know more about the subject? You will find more information in the following post:

–The best cienemas an theatres of Madrid

The emblematic buildings, one of the main tourist attractions of Gran Vía

But if something else, apart from its theaters and cinemas, is absolutely representative of the Gran Vía are its imposing buildings. Some of them are those that house their large rooms dedicated to the performing arts, such as the Capitol Building or the Press Palace.

Other characteristic buildings of the Gran Vía are:

• Grassy Building: home from the 50s of the twentieth century of the exclusive jewelry Alejandro Grassy. In Gran Vía 1

• The Star Building Insurance:with its monumental porch with the sculptures of Pandora, Vulcano and Aphrodite. Built on the floor of what was Masserano´s palace. It was the home of Victor Hugo during his childhood. In Gran Vía 10

• Metropolis Building: at the top, Benlliure, Landowski and Lambert sculptures represent commerce, agriculture and industry. In its imposing dome, the iconographic sculpture of Ganymede, by the sculptor René de Sanit-Marceaux. On the corner between Alcalá street 39 and Gran Vía.

• Telefónica Building: the first skyscraper in Madrid was also the building with the most cutting-edge technology, as a location for the state company Telefónica. All a symbol of the city. In Gran Vía 28

To learn more about its architectural value, we recommend this post:

Increase its trees, make a partial pedestrianization by removing the architectural barriers for people with reduced mobility and implement a bike lane to decongest traffic and reduce pollution are some of the plans for the New Gran Vía that has launched the City of Madrid.

The works began in April and are scheduled to finish in November of this year. And despite the inconvenience that always originates any remodeling in the urban area of ​​Madrid, the project is moving forward.

Although it is still to be seen how it is, what is clear is that the Gran Vía will reinvent itself once again, and will manage to preserve its essence as one of the most important enclaves of the city.

The Gran Vía is our home, the location we chose in Vitium Urban Suites to open our urban boutique hotel.

We are delighted to be part of this historic avenue, and to provide tourists and visitors with the possibility of staying in the Gran Vía to enjoy all its offer of culture, leisure and entertainment.

Are you looking for a hotel and want to be in the most cosmopolitan area of ​​Madrid? Make your reservation now! We will wait for you.