Almudena Cathedral Museum: all you need to know 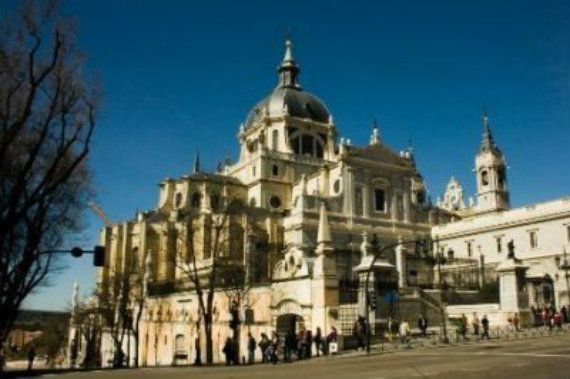 With more than 70,000 visits per year, the Almudena Cathedral Museum has become a touristic attraction for lovers of history and heritage. This centre, the only religious museum in Madrid, which is located inside the beautiful cathedral, shelters valuable historical-artistic assets. All of them are part of the collection of cult objects from the old parish of Santa María de la Almudena.

If you are planning a visit to the center of Madrid you can’t leave without knowing the impressive architectural structure of The Almudena and the important treasures that it keeps inside. Take a look at this post and discover everything that awaits for you in the Almudena Cathedral Museum.

Where is the Almudena Cathedral Museum?

The Cathedral of the Almudena is the site in which the museum named after it is located. The main façade of the temple is facing the Royal Palace.

From the start, the temple was conceived as an integral part of the palace in such a way that the cathedral has a north-south orientation, unlike most Christian buildings oriented from east to west.

The Almudena Cathedral is the seat of the archbishop and the main temple of the Archdiocese of Madrid. The cathedral’s impressive measures show its importance: 102 meters long and 73 meters high at its highest point.

Almost 100 years of work were needed to shape the Almudena Cathedral. The works began in the late nineteenth century and ended at the end of the last century. Different architectural styles have been used in its building.

The neoclassical style is the theme of the outward facing of the cathedral, the Neo-Gothic style gives shape to the inside, while the neo-Romanesque style dominates in the crypt.

The Cathedral, raised to honor the Virgin of the Almudena, can proudly say that it is the only one in Spain consecrated by a Pope.

The cathedral museum opened for the public in 2007 with the aim of bringing to light the rich heritage of worship that the temple housed. The museum works not only for exhibitions, but also for the custody and preservation of the goods of worship that are used for liturgical purposes use during certain times of the year.

The visit to the Almudena Cathedral Museum begins at the Chapter Hall and the Main Sacristy. In these rooms you can admire Father Rupnik’s beautiful and colorful mosaics.

In addition, you can admire the paintings of the monarchs who promoted the building of the temple. They were Alfonso XII and his wife, Maríaa de las Mercedes, whose remains rest under the Virgin of the Almudena in the cathedral.

You can also enjoy another priceless piece: Juan Diacono’s code, also known as San Isidro’s code. This document, dating back to the thirteenth century, tells the life and miracles of the patron saint, and was used in his canonization’s ceremony, within the first half of the seventeenth century.

Different cloaks of the Virgin of the Almudena of enormous quality; a custody of the Real Slavery of the Almudena from the late seventeenth century; the sculptural piece of La Inmaculada made by the artist Martínez Montañés; a processional custody from the mid-eighteenth century, developed by Francisco Martínez de Toro and Pablo Ibáñez; or Esther’s scroll, which is part of the five Megilloth (Hebrew biblical books) and is dated in the sixteenth century, are some of the jewels you can see in Almudena Cathedral Museum.

The first phase of the tour culminates with the access to the cathedral dome, which is one of the main attractions for the public. The views from the top impress anyone. From the different viewpoints at the cathedral dome you can see Madrid 360º.

The next part of the tour goes through the gallery of the Almudena Cathedral Museum. The Catholic Church’s liturgy described through ceremonial objects related to the Seven Sacraments centers the visitor’s interest. The visit concludes with a memory of John Paul II, who consecrated the cathedral in June 1993.

We recommend that you do not leave the temple without visiting the Cathedral Crypt, located just below it. You can access it from the Calle Mayor (at the south side of the building). This space, with more than 400 columns, 20 chapels and beautiful stained glass windows carved by the Maumejean House, impacts the visitor.

Access to the Almudena Cathedral Museum is located to the right of the temple’s main facade, in front of the Royal Palace. Right there you will find the ticket offices where to buy the tickets. The cost of the basic rate is 6 euros. You can check special rates here.

The museum space remains open, except for specific dates, from Monday to Saturday during morning hours: from 10 am to 2:30 pm.

The Almudena museum space brings a bit of Madrid’s History to the present. Do not miss the opportunity to visit it if you travel to the capital.

Are you looking for accommodation? Take a look at the offers of our Vitium boutique-hostel, located a 10-minute walk from the Almudena Cathedral Museum.

Entrada anterior
Top 7 places to take pictures in Madrid
Entrada siguiente
¿What is a food truck?