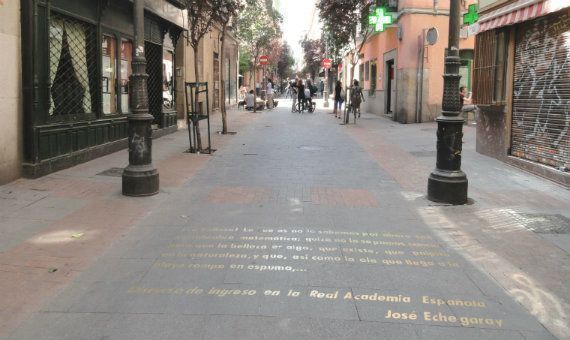 We have already mentioned that Madrid is a city in which every corner you discover a bit of history. But in Barrio de las Letras, this statement is no longer a metaphor to become something literal.

A touristic route through Barrio de las Letras in Madrid

And is that walking through Barrio de las Letras you can find the most illustrious quotes and verses of The Spanish writers of the Golden Age.

But let situate ourselves temporarily in the Barrio de las Letras, because its history is not wasteful.

A brief tour of the history of Las Letras district

The Barrio de las Letras is located in the area of ​​Huertas, and it makes its way between the Paseo del Prado, the Atocha Street, the Carrera de San Jerónimo and Carretas. In the Late Middle Ages, the current Barrio de las Letras (Literary Quarter) was an area of ​​gardens and orchards owned by the Marquis of Castañeda.

The area underwent a process of increasing urbanization that turned it into a suburbs where they would stop anyone who could not pay an area closer to the royal palace. Among them, some of the most illustrious writers of the sixteenth and seventeenth centuries: Cervantes, Quevedo, Calderón de la Barca, Góngora or Lope de Vega.

The illustrious Don Quixote de la Mancha first appeared in the printing press of Juan Cuesta, on Atocha Street, in 1604.

It is an area of ​​Madrid that exudes history in every building, in every corner, and in each cobblestone. And in fact, those are their cobblestones, with the words of the great ones of the Spanish Literature fixed in golden letters for centuries, the most popular of Barrio de las Musas. The first words of Quixote, the dark swallows of Bequer, or the everlasting rivalry between Quevedo and Gongora, echo in the slabs of its streets.

But the verses and golden quotes that come to the road are not the only touristic attraction in Barrio de las Letras in Madrid.

Barrio de las Letras is a quasi-inexhaustible source of details, references and historical traces of the past. For this reason, in this small route we can only mention a few points on the map. But yes, those which we recommend, you cannot miss!

The seat of the Ateneo, in the Prado street, is housed in a building of neoclassical facade, in whose interior resides one of the intellectual boils of the Capital.

Great intellectuals have passed through the Ateneo since its founding in 1835. There are all kinds of conferences, exhibitions, concerts and all that can feed the curiosity and desire of culture lovers.

The Ateneo makes guided tours in which visitors have the opportunity to discover the secrets of the building, declared Historic-Artistic Monument.

And from an important cultural institution of Madrid we pass to another: CaixaForum, in the Paseo del Prado. All kinds of activities, exhibitions, etc., in the old building of the Power Plant, converted into a modern temple dedicated to culture.

The most surprising thing for the tourist is its exterior vertical garden, the first one created in Madrid.

The house where the great Lope de Vega spent the last 25 years of his life is today a museum in which visitors can immerse themselves in both the life of the literary and in the Madrid that Lope Lived.

Despite successive renovations, the house still retains some of the original rooms. The museum is open to the public and very interesting activities are held for the culinary connoisseurs.

And if you want to know the Mecca of live music for the inhabitants of the Barrio de las Letras, you should visit Café Central. A peculiar space to live the music very closely. In this cafe they have played artists of the stature of George Adams or Sam Rivers.

But if you are wondering where to eat in the Barrio de las Letras, in Café Central you can also do it, thanks to a menu with delicious dishes prepared by the excellent Donostia chef Juan Miguel Pérez Páramo («Micky»).

Where to stay near the Barrio de Las Letras?

Come to Vitium and enjoy a different concept of hotel accommodation, we are waiting for you!