GETAWAY, MADRID IN ONE DAY 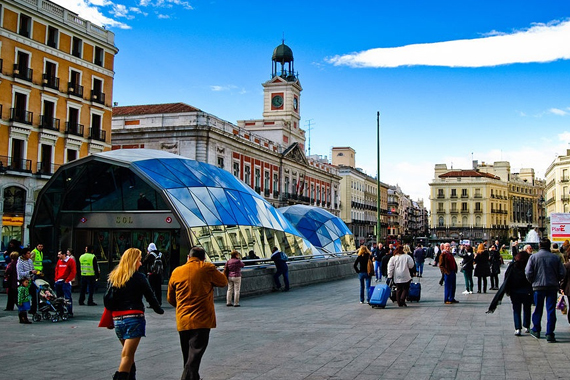 Madrid is a city that has a very varied offer, innumerable places to see and places to get lost. To be honest, Madrid is a city that cannot be seen complete in a single day, for all that it encompasses, from its most mythical neighborhoods to its most emblematic monuments and squares. But you can visit the most important places if you organize a good route and some schedules to follow.

Madrid is a city that makes you fall in love with just walking through its streets, for its light, harmony and its life.

Just one day in Madrid? 24 hours to enjoy it

If you only have 24 hours, you have to make a route with somewhat tight schedules, so it is important that you get up a little early since you will be visiting places from morning to night to be able to enjoy the city as much as possible and thus be able to savor all its charms.

Next, we will establish an organized route to see the maximum of all the attractions that the city has.

Route: One day in Madrid

We will start the morning with a good breakfast in the Plaza Mayor, one of the most emblematic squares of the city. There we will be able to taste the typical Madrid breakfast; good coffee with churros.

Then, very close to the Plaza Mayor, going down Calle Mayor is the famous “Puerta del Sol”, no one who comes to Madrid can miss this mythical square, where km 0 of the Spanish roads is located. And you cannot forget to take a photo with the bear and the Madroño, emblem of the capital.

We will continue along one of the most famous streets of the capital, which begins right at Puerta del Sol: Calle de Alcalá. Walking along this mythical street, while we observe its emblematic and famous buildings, we arrive at the most famous fountain in the capital: La Cibeles. Here we will find the Madrid City Hall, one of the most majestic buildings in the city, as well as the Central Bank. If we continue advancing along Calle de Alcalá we will come across the mythical Puerta de Alcalá, built by Carlos III. Just to the right is the main entrance of the Retiro Park, one of the green lungs of Madrid where you can stroll through its gardens and ride a boat in the more than well-known pond, where the majestic monument to Alfonso XII is housed.

Once you have walked through these wonderful places, it will be time to eat, and what better way than to try the typical Madrid dish: the stew; in typical restaurants such as La Bola or La Taberna del Alabardero.

In the afternoon, we can start visiting the Plaza de España, a square that houses the famous monument to Cervantes, with the statues of Don Quixote and Sancho. Nearby is the Temple of Debod, a majestic monument that was a gift from Egypt to Madrid.

Without leaving the area, it is time to visit the impressive Royal Palace, where the most important receptions are held, surrounded by the Sabatini gardens and the Campo del Moro gardens. The Palace is located in the mythical Plaza de Oriente, which also houses the Royal Theater, which recently turned 200 years old. A few meters away is the Cathedral of La Almudena, which was consecrated on June 15, 1993 by John Paul II.

And finally, It`s time to discover, without a doubt, the most emblematic street in the city: La Gran Vía and its historic buildings. Cinemas, theaters and musicals. This is where Madrid’s Broadway starts. In addition, Gran Via houses the main fashion stores so you can do your shopping. And don’t forget that Vitium Urban Suites is at number 61, a luxury boutique hostel where you can stay during your stay in Madrid.

Arriving at the end of the afternoon and entering the night, it is time to visit the mythical neighborhoods of the city, such as Las Letras or Los Austrias, where you can have a beer in the Plaza de Santa Ana, have dinner in the neighborhood de La Latina and enjoy an unforgettable evening before ending the day in the Madrid and traditional Plaza de Cascorro.

Previous Post
Are you looking for a coronavirus-free luxury hostel in Gran Vía?
Next Post
Why stay in a boutique hotel in Madrid?