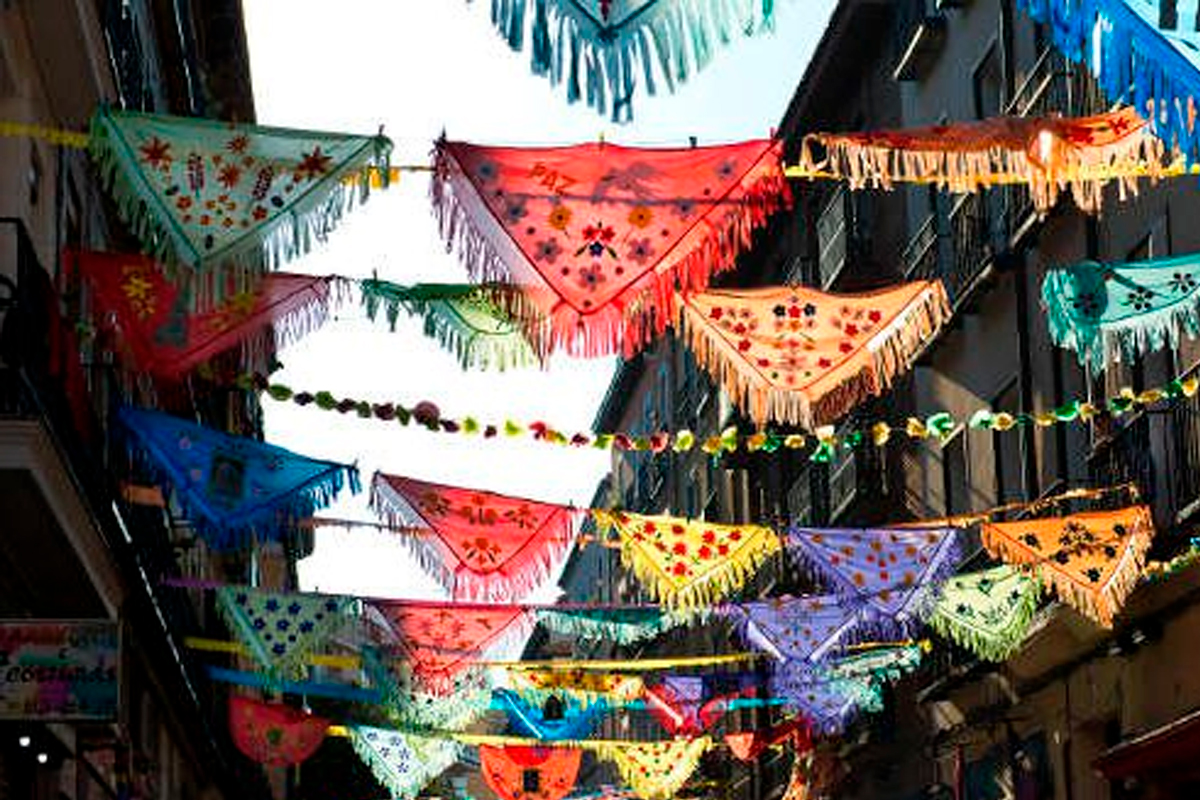 The month of festivals in Madrid has arrived!

But, if you want to get to know the most traditional and joyful festival in Madrid, you cannot miss out on attending the “Fiesta de la Paloma”.

It is one of the most important popular summer festivals in the capital, it is celebrated in the district of La Latina, they are held in honor of the Virgen de la Paloma and are a good opportunity to enjoy the great atmosphere that is experienced in the streets.

Full of many traditions, such as seeing people dressed as “chulapa” or “chulapo” (traditional costume from Madrid), listening and watching the “chotis” dance, drink lemonade. One of the most popular churches in Madrid is the Church of la Paloma, in the district of La Latina, it is located in la Plaza Virgen de la Paloma, 19.

Here we will find a painting, that of the “Virgen de la Paloma”, this painting represents the moment in which the virgin buries her son and is left alone and spends those two nights of anguish. This devotion to the Virgen de la Paloma is very old. Since the XVIII century, when the 15th of August arrives, the streets and squares near the church of “San Pedro el Real” are decorated. It is one of the ways to honor the one who, without being the patron saint of the people of Madrid, is the most traditional Virgin.

This virgin, who it really is the Virgen de la Soledad, highly venerated since the time of Felipe II and of which there are many paintings, has a very ancient history, wrapped in legend. And that legend has reached our days and is part of the attraction of the church.

The chroniclers say that this painting was found by some children in an oven where they were going to burn furniture. They picked up this painting and took it to the house of their aunt Isabel Tintero, who is buried in this parish, she decided to put the image on the front of her house and in a short time people began to pray the rosary every afternoon, that unleashes a chain of miracles that reaches the royal house and then a chapel is planned, and that’s how it all began.

Programming of the Fiesta de la Paloma this 2022

This year after 2 years of hiatus, these holidays can finally be celebrated properly.

Although as we said at the beginning, August is the month of festivals in Madrid, these of the Virgen de la Paloma are on the 14th and 15th, this means that nothing else is celebrated the previous days.

We are going to be able to enjoy many traditional activities such as concerts of any type of musical style on open-air stages, the famous bars that the bars take out to the streets with their music so that you can drink and dance until the wee hours of the morning, without leaving the important procession of the virgin, the glorious festival, the manila shawl contests and the tasting of typical plates

Here we leave you the program of these festivities so that you can sign up and plan these days:

How to get there?

In the La Latina neighbourhood, the metro line is 5 (green) and the closest stations are La Latina and Puerta de Toledo.